Giuseppe Musolino: a Drama in Acts

In association with Calandra Institute for Italian-American studies.

A very special world premiere of a play discovered by Evan T. Cummings in his attic. The play was written by his great-granduncle, a reporter and writer from Calabria, who often traveled between the US and Italy and it seems he was one of the reporters for the trial of legendary folk hero Brigante Musolino. The play is presented in double bill with Il Figlio dell’Abisso, another play by Morabito. 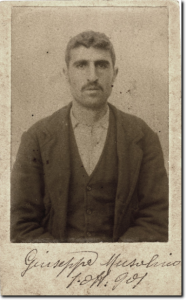 Giuseppe Morabito (1882-1925) was a journalist for Mense di Liegi, la Nation belge di Bruxelles, Il Giornale d’Italia, l’Agenzia Stefani, Il Messaggero, L’Illustrazione Italiana.  he was the founder of the League Italian-Belgique and was friends with several personalities such as Vittorio Emanuele Orlando, Antonio Salandra, Luigi Luzzatti and Gabriele D’Annunzio. he write three plays – that we know of – ‘presented in several American cities’ according to him.

Evan T. Cummings is a New York-based director whose grandparents and great-grandparents were immigrants to this country from Calabria and Naples. He is very proud to be presenting a newly-discovered piece of his family history in In Scena 2015. Past collaboration with KIT Italia includes the World Premiere of Evan’s play Imperi(um) presented in Rome as part of Il World Wide Lab a Roma. In the U.S., Evan has directed and developed work at Geva Theatre Center in Rochester, NY, the Walnut Street Theatre in Philadelphia, and NYC’s The Private Theatre. He dedicates this reading to his family: those who are still with us, and those from the past he is just getting to know.