Please note: This event is FREE for Members of Casa Italiana. Member-only RSVP: 212-502-7944 – RSVP deadline: 24 hours prior to event start. To become a member of Casa Italiana, please contribute a minimum of $50.

SYNOPSIS – The piece tells the story of Carletta, the village fool, who witnesses the kidnapping by the Calabrese mafia – ‘ndrangheta – of the Italian national soccer team. The army, politicians and journalists, too busy creating a media storm around the event, and blinded by the magnitude of the news, don’t notice her. She’s the only person who knows where the team is hidden – but nobody believes her.

The show’s title is a quote from the Italian national hymn.

“L’Italia s’è desta” has been awarded numerous prizes, including the Teatropia 2012 award (Mafia & Politics themes), the Restart Award at the Politically Incorrect Festival 2013, and Antimafie Dirittinscena Award 2013. It was also a finalist for the prestigious Hystrio Stage Writing award 2012.

Compagnia Ragli – The show is presented by Compagnia Ragli theatre company. The company’s name identifies a starting point: the ‘raglio,’ meaning bray, as an evocative sound that represents meaning that begins from noise. Founded by author and director Rosario Mastrota, who trained and worked with famous Italian theater personalities (Motus and Emma Dante among others) and actress Dalila Desirée Cozzolino, who trained at the Centro Internazionale Formazione delle Arti in Cosenza, Calabria, and the Accademia Corrado Pani in Rome. Dalila Desirée Cozzolino was also awarded the 2012 ‘Premio Centro’ Best Actress Award.

“L’Italia s’è desta” is the first play in an original trilogy by the Compagnia Ragli. 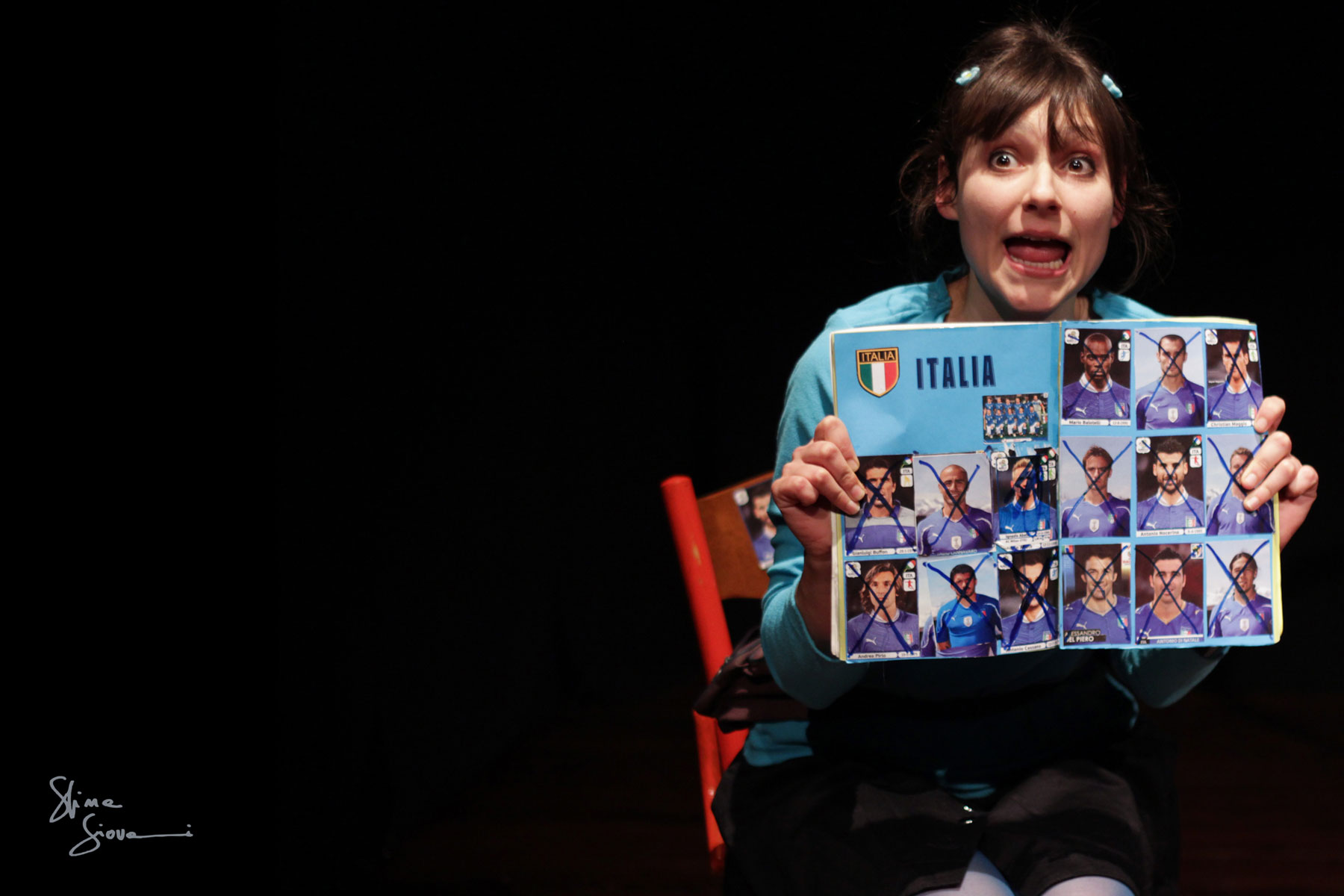 “Delicate, fresh writing […] Mastrota depicts with amused but thoughtful courage and his actress responds in kind with an invested performance, full of love for this story, taking on a very characterized role without falling into caricature, leaving behind a shadow of herself with volatile lightness, albeit veiled with bitterness . […] ” – Quaderni dei Teatri di Roma

[…] The Compagnia Ragli use expediency and theatrical fiction in order to tell the truth: about the ‘Italietta,’ about ‘Mother Calabria.’ In a farcical vein, veiled by a delicate irony, with a taste of mockery […] The efficacy of the show is absorbed like when you read a text in one go, because you’re glued to the page. […] Of immediate impact, heartwarming, instantly satisfying […] – Hystrio

“The Compagnia Ragli, with clarity, delicacy and humor, tries to undermine the image of the ‘Ndrangheta, not through the eyes of the media or through governmental power, but thanks to the invisible gaze of an outsider […] Delilah Cozzolino creates a character full of strength and zest for life. Built around specific a specific physicality – an unpredictable and hilarious play of facial expressions and gestures – and verbal score: language that retains the taste of dialect without ever exceeding the mark, interplay of sounds that never becomes grotesque […] An “oblique” narrative that deliberately glosses over important details, preferring to let us into the story via unexpected openings” – Teatroecritica.net

“A delicate act of love dedicated to Calabria and to justice. […] A perfect performance, which remains with you for quite a while.”- Gazzetta del Sud

“The text of the show combines condemnation of organized criminal activities and poetic exaltation of the ‘outsider.’ […] it unfolds backwards, like a skein to be unraveled little by little […] Carletta, heroine by chance […] “- Quotidiano

“Few people know that ‘the insane’ go beyond common understanding, and this was precisely the focus of the show that has delighted and surprised the audience thanks also to the impeccable work of the director Rosario Mastrota […] A short and intense monologue” – Ottoetrenta.it