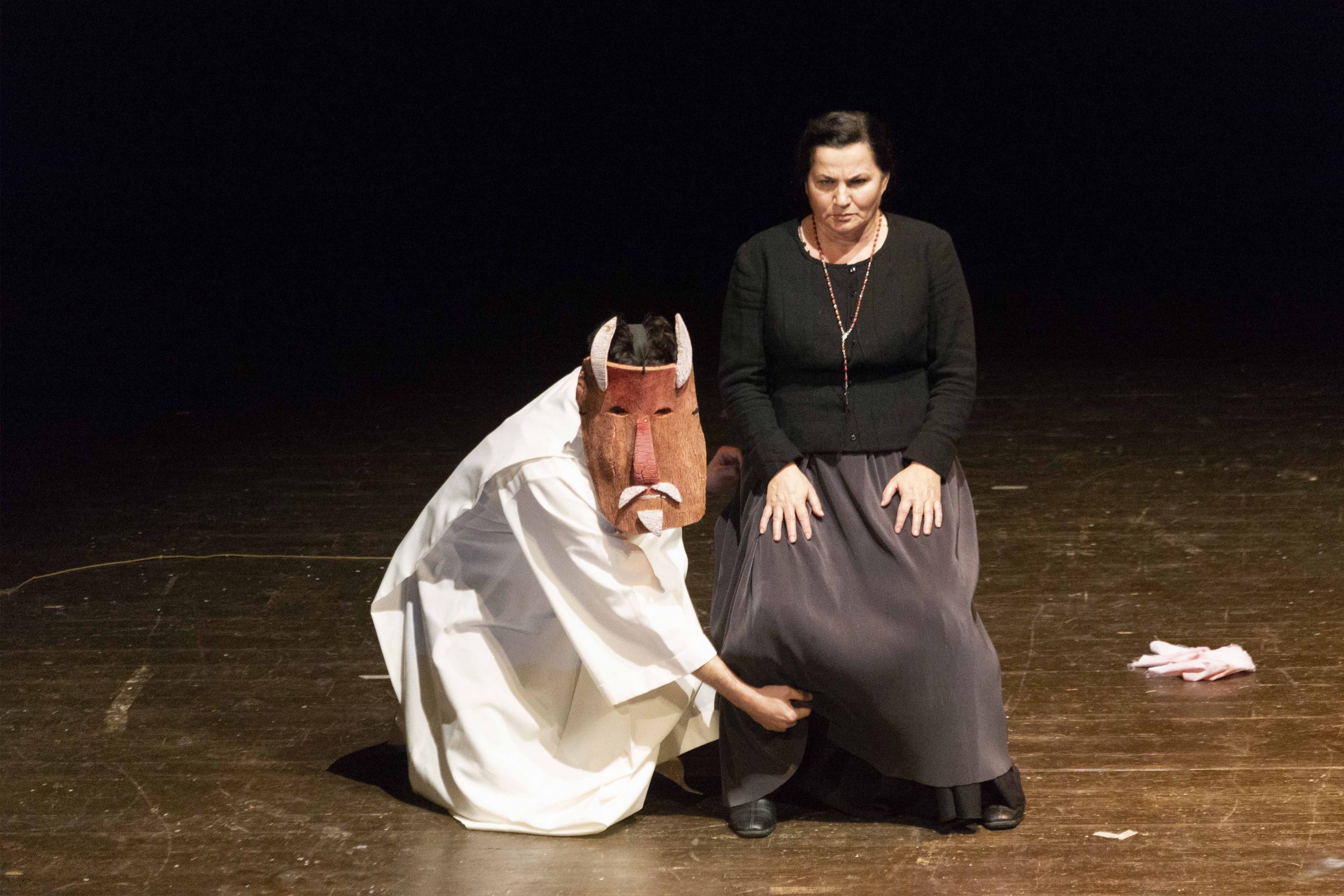 SHOW IN ITALIAN WITH ENGLISH SUPERTITLES

Based on the book by Salvatore Niffoi (Campiello Award 2006)

A performance in the very ancient Sardinian language from the Barbagia area. 1930s, life follows both traditional rules and Fascist rules. The main character, Mintonia, is no ordinary woman as she reads long books and decides on her own who to marry. Something will happen that will dramatically change Mintonia’s life. But she will prove she is no victim.

Theandric Teatro Nonviolento was born in 2001 out of the encounter of the actor and director Gary Brackett and the actress, director and Philosophy scholar Maria Virginia Siriu. The theatrical project has taken shape through the research of the founders on the renewal of artistic languages in relation to the social role of theater as a vehicle capable of fostering and spreading critical thinking on contemporary man. Since its foundation, Theandric has been carrying out research activities in the field of “political theater”, meaning a total theater. A theater that does not admit a separation between scenic and social space. A theater that wants to reflect, together with the audience, on the most urgent issues of contemporary life, and wants to seek an incentive to act. An action that will not necessarily happen on stage, but in everyday life. This research soon started focusing on nonviolence as an alternative to conflict resolution at a personal, social and political level. Nonviolence has become a lifestyle choice and the heart of theatrical work, which pursues its diffusion through two different situations: the performances and cultural events/workshops in which participants work on the development of a nonviolent personality using drama techniques.

Maria Virginia is a director and the Artistic Director of Theandric theater company. She made her debut in “Don Cristobal and Donna Rosita”, directed by Guglielmo Ferraiola. From 1997 to 2000, she trained with several members of the C.I.C.T. in Paris directed by Peter Brook: Bruce Myers, Yoshi Oida, Alain Maratrat, Tapa Sudana, Karunakaran Nair, Miriam Goldschmidt and Sotigui Koiuaté. In 1997 Maria Virginia met Judith Malina from the Living Theater, with whom she collaborated as a stage director and assistant director until 2003 at Centro Living Europa, Rocchetta Ligure, participating in workshops and the filming of classic productions. In 2001, she founded Theandric, becoming the Artistic Director of the company and of the “Love Sharing Festival of theater and non-violent culture”.

Actress. She begins his theater studies at the Akròama Training Center in Cagliari. She studied and interned with actors close to Peter Brook and Rena Mirecka (Grotowski’s actress). In recent years, she has been involved in several plays by Sardinian companies, both on National and International tours (“The Barefoot Widow” directed by Maria Virginia Siriu, “The House of Bernarda Alba” by Maria Assunta Calvisi). She also played small roles in cinema (“Accabadora” directed by Enrico Pau, “Happiness, finally” by Leonardo Pieraccioni, “Deu ci siat” by Gianluigi Tarditi, “The last frontier” by Franco Bernini).

Actor. Born in Iglesias in 1981. Initially self-taught, he took his first steps in small companies in his city. He took singing and acting lessons, as well as fencing and archery. From 2018 he works permanently with Theandric Teatro Nonviolento, Talenti Stravaganti and other theater companies from Cagliari. He devoted himself to teaching theater to the students of the Talenti Stravaganti company. He also shoots commercials.

Actor. Born in 1985 in Cagliari. Graduated in Foreign Languages and Cultures, he has always been a cinema and drama enthusiast and that is why he decided to approach this world. He has studied and worked with several companies in his city, such as Theandric, Intrepidi Monelli, Artisti Fuori Posto, Ferai, and has taken part in plays, films, short films, commercials and web series. He also acts in English language with the company Waltzing Matilda Players.