This is a single blog caption
30
Apr

A middle-aged retired lawyer and amateur poet becomes infatuated with a young reader he glimpses at the beach. He contacts her through a former colleague and lover, with a proposal to solve her financial problems in return for granting him permission to observe her while she reads, in peculiar circumstances which – as the story unravels – become increasingly intimate and morbid. This abnormal “love triangle” becomes deeper and more obsessive, until its disturbing ending.

The Woman Who Reads draws inspiration from memories of the places and people in a provincial seaside town in Italy, as well as from a chapter in Joyce’s Ulysses, “Nausicaa”, and from reading Francesca Serra’s stimulating work Good Girls Don’t Read Romances. It touches on themes like conflict among the sexes, generational conflict, the desire to escape, but also the familiar calling of a sea that resembles a swamp. It also talks about money and the desperate people who worry about earning it. In a confusing and perverse twist there’s no lack of love; but it’s love that exists in a place that is either impossible or has been lost. The characters in The Woman Who Reads search for one another with passion, always at the wrong place and time. 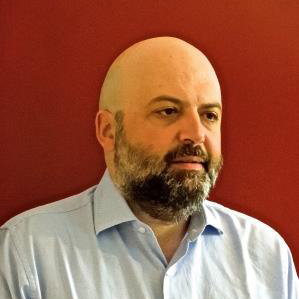 Born in 1966, playwright, dramaturg and screenwriter. He made his debut in 1989 at the C.R.T. in Milano. From 1997 to 2001 he was a playwright at the Centro Teatrale Bresciano. He wrote and directed various plays for the CTB such as Giudici (published in  “Hystrio” XVI, 1). His comedy Vendutissimi. Mobile Thriller, staged inside a car, received the Herald Angel Prize at the Fringe Festival in Edinburgh in 2004. In 2005, he wrote the bilingual text A Different Language for Scottish company Suspect Culture. In 2008, he won the Hystrio Prize for screenwriting and in 2009 the Milano Prize from the Teatro della giuria degli specialisti for Tre. As a dramaturg he collaborated with the Teatro delle Moire and with the E.S.T.I.A. company, which operates at the prison in Bollate. In 2011 he curated the “Scrivere per il teatro” (Writing for theater) segment, vol. 17 in io.scrivo – Corso di scrittura del Corriere della Sera. The following year he adapted William Shakespeare’s Julius Caesar, directed by Carmelo Rifici, for the Piccolo Teatro in Milano. He is the author of the guide Writing for theater (ed. Carocci, 2015). He teaches screenwriting at the Civica Scuola di Teatro “Paolo Grassi” and the Public Film School in Milan.

Maggie Rose is a playwright and translator. She is a member of Scotland Playwrights Studio and the Scottish Society of Playwrights. She teaches British Theatre Studies at Milan State University. She spends part of the year in Scotland for her writing and research. Her stage and radio plays include: works about Italian migration to Scotland. Besides plays reworking and inspired by Shakespeare, plays inspired by Literary Figures and plays exploring European identity, she is the author of short stories and theatrical storytelling for children. She has led several writing and theatre translation workshops and co-directed International festival-symposiums. For her stage translation and adaptations she has worked, among many others, for “Domani” at the Winter Olympics in Turin, directed by Luca Ronconi (2006), Alice in Wonderland, directed by Emiliano Bronzino opened at Milan’s Piccolo Teatro (2010 – 2011), Alan Bennett’s The History Boys at Elfo-Puccini theatre, is in its third year (2010-2013).